Walter E. Smithe - found beautiful pieces of quality furniture from multiple manufacturers that made this room functional and cohesive in style, color, and scale.  Also, recommended a paint scheme of grays (darker gray on feature wall with fireplace).

Fun-ctional Design - After the entertainment center was delivered, I created a backdrop behind the TV to highlight the empty space between the piers (see more below).

Walter E. Smithe & Fun-ctional Design - used Google SketchUp as an added visual aid to give my clients the most accurate depiction of my vision for their living space.  Also used my Photoshop skills to re-colorize two of their favorite vacation photos and used a Walter E. Smithe art vendor to transfer the images I recreated as a large canvas painting (see more below). 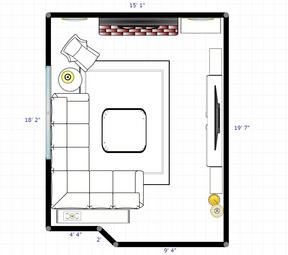 Client was concerned that the area rug would cover up too much of the new hardwood floors.  I addressed those concerns by proposing a double tiered wall feature behind the TV that would illuminate using his left over flooring.  The back layer of flooring was installed vertically and mimics the same diagonal as their vaulted ceiling.  The layer of flooring in front of the first layer go horizontally to help frame their existing flat screen TV.  With one touch of a bottom, the wall feature lights up giving further visual interest as-well-as ambient lighting.

The small vacation photos on their walls were not doing the pictures or the space justice.  I took their two favorite photos from their travels and used Photoshop to render the structures in the same gray tones as their freshly painted walls and tweaked the sky color to teal which was one of their accent colors in the room.  I also leaned the two images inward so the eye effortlessly leads toward the fireplace - the focal point on this wall.